This has been the longest stretch of time I’ve spent without setting foot on an airplane in the last 30 years of my life… This period has had me reminiscing and cleaning out the office a bit.  As we were editing files and purging our cabinets, I came across these early travel photos of my first trip to Tanzania in 1991. The world was a different place and travel was easier in many ways. This was pre 9/11, pre SARS, pre H1N1, pre CORONA, it felt free… like the world was mine to navigate.

As a 25 year-old man on a mission to collect gem samples for the Gübelin Gemological Laboratory, I was filled with energy and excitement for the opportunity to visit several different mining locales. In Landanai, on our way to see the chrome tourmaline mine, we came across two young miners who persuaded me to follow them to their rhodolite garnet mine. We entered the mine using only the light from the flame of their homemade oil lamp. Entering the mine, I quickly became aware that we would be climbing about 30 feet down a set of alternating rock ledges, or shelves. As we continued, we came to the end of a short tunnel, where we were only able to dig for 10 minutes or so before the lack of oxygen extinguished our lamp. Luckily, I had a battery operated flashlight and we were able to climb our way back out. We found only very poor quality rhodolite nodules in the mine, but were able to buy a few nicer pieces from the miners. As we journeyed to the main Landanai mine, a tower of giraffes greeted us along the dusty path, providing a perfect photo opportunity with Mt. Kilimanjaro in the background competing for stardom. 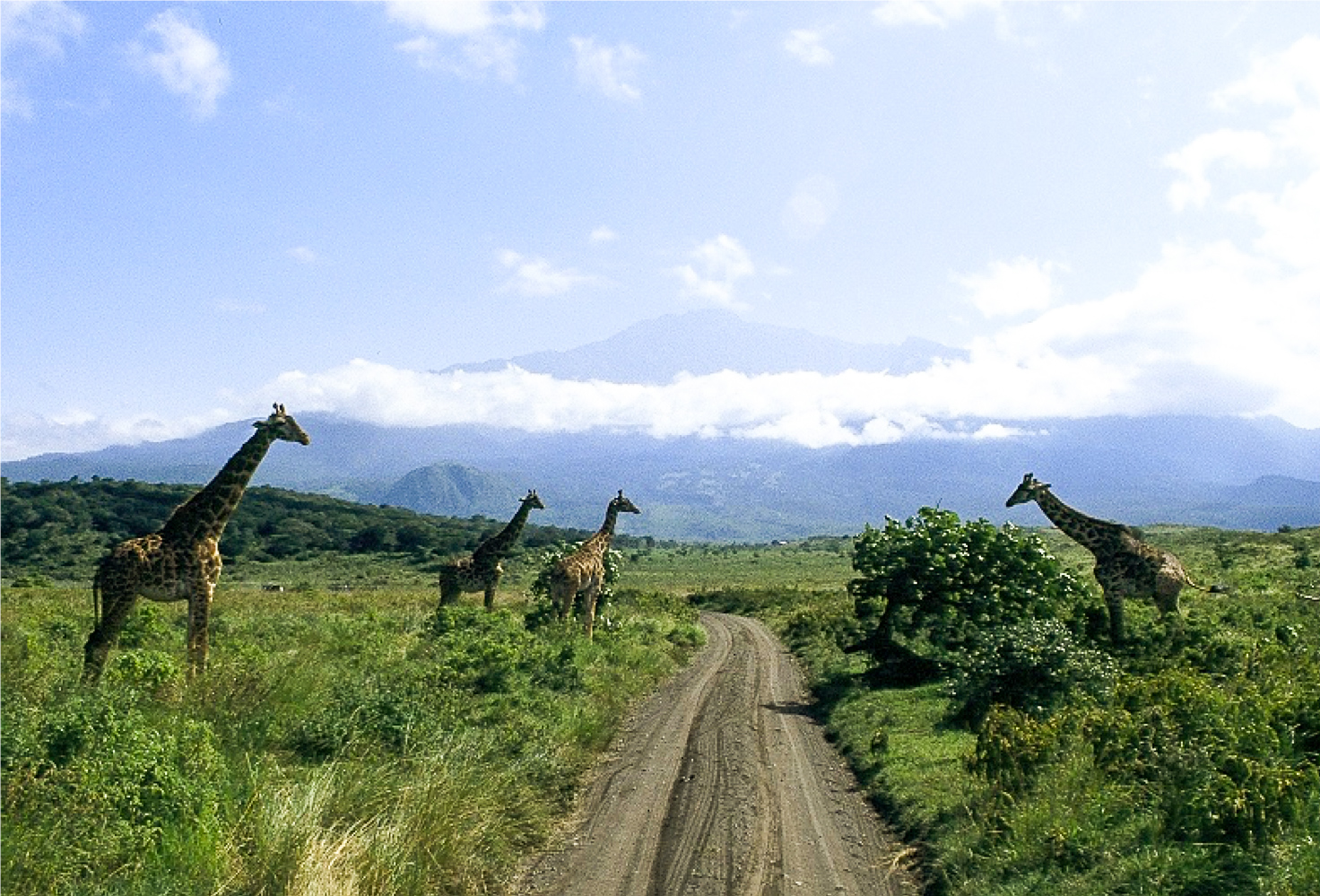 The next duo of photos is of the terrain and earthly findings of the Landanai mine, showing the weathered pegmatite on the left and rich green chrome tourmaline crystals in matrix on the right.

The camp was crafted of several typical mud-walled bush houses, surrounded by sparse vegetation and free range chickens, one of which was masterfully prepared by the cook and camp mother sitting to my right in the kitchen hut.

A few days later, we visited what were then called Blocks A, B and D of the tanzanite mine in Merelani. These areas were not officially open to visitors, but we managed to gain access since we were there as gemologists collecting samples and documenting the mining process.

In the above photo, you can see the numerous tin roofs covering independent mine shafts in Block D. In the background is Block C, which is where mining giant, Tanzanite One, had its concession for many years. Following in the next two photos are typical independent small-scale mine shafts in Block D with a motorized lift for transporting miners, tailings and gem material.

Meeting the people was a true highlight of the trip, and learning about their days, their mining methods and sharing experiences enriched my soul. The knowledge I gained helped me understand some of the challenges they face; from something as simple as the mine foreman using a flashlight strapped to his head as his mining light, which prompted me, on my next trip there, to bring mining lights to give to the miners. Our ease of life and access to supplies kept me from realizing that the miniature batteries required to operate the small, lightweight lamps weren’t readily available near most mining areas. Now I bring replacement batteries, which are probably more valuable than the lights themselves. The miners are an incredibly resourceful crew and can make many of the items they need, as evidenced by the photo of an enterprising miner using a modified bicycle to power a tool sharpener.

During my visit, several miners and dealers showed me rough samples of a newly discovered, unknown green gem. Due to its trichroic colors, readily visible using a dichroscope, I suspected that it might be zoisite. This was further supported when I visited renowned gem dealer and author, Dr. N.R. Barot, in Nairobi, who had collected and cut various colors of zoisite, including some greenish colors that strongly resembled the material I had seen at the mines in Merelani and with dealers in Arusha. When I returned to the Gübelin Lab with the rough and cut stones I had collected, advanced testing confirmed our suspicions that this new green variety of zoisite was indeed tanzanite. Dr. Barot and I then co-authored an article on the new, gem quality green zoisite that was published in the Spring, 1992 edition of Gems and Gemology.

I have savored my moments at home, in my office and with my family, but I look forward to traveling again soon and feeling that same anticipation of the unknown, the fresh find, and new adventures.

Maasai traditions associate the color blue with new life, so it is only fitting that tanzanite, a stone discovered by Maasai herders in 1967, is the traditional gift for new mothers. It is, truly, the ultimate Birthstone.

A relative newcomer to the gem world, tanzanite has made a lasting mark on the jewelry industry. Mined only in one small area of a few kilometers in the Merelani hills, approximately 70 km Southeast of Arusha and Northwest of Mount Kilimanjaro, this rare stone is coveted by collectors and jewelers alike.

The rarest color of tanzanite is green, colored by trace amounts of chromium. Discovered in 1991, the local miners called it “combat”
because of its yellowish-green to bluish-green color. It is still considered one of the most collectable gems from Tanzania.

Read more about green tanzanite in this article by Edward Boehm and Dr. Barot – Gems and Gemology, Spring 1992

Tanzanite was discovered in 1967 when wildfires engulfed the Merelani hills at the foot of Mount Kilimanjaro, naturally heat treating the material and exposing their striking blue-violet color.  A group of Maasai herders saw the exquisite stones and reported their findings to Portuguese geologist, Manuel D’Souza, who introduced this new discovery to the western world.

Tanzanite’s strong pleochroism causes it to display a multitude of colors, primarily blue and violet. Depending on the lighting, a single gem can present as blue, violet and burgundy. This is due to the trace amounts of vanadium and/or chromium present during its formation. As with many gems, larger stones tend to appear in a deeper color than their small counterparts.

Most tanzanite has to be heated to improve its color, which reduces or removes its reddish brown properties or improves color saturation.  Recently, natural color material has gained favor because of the strong pleochroic colors that can be manifested through skillful cutting.